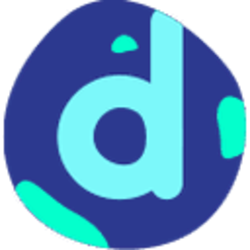 During the last calendar year district0x price was volatile and had both periods of growth and decline. In particular in the last 7 days the price changed by 28.09%. (dnt)'s peak price (All-time high) was £0.35 per coin, this point was reached on 19th April 2021 . From that moment till today district0x has lost -89.17% in value.

district0x – is a network of districts which represent decentralized digital markets and communities. It runs on d0xINFRA framework, an open-source framework which embraces smart contracts, Aragon, and InterPlanetary File Transfer Protocol (IPFS). Developers can deploy new districts and add baseline features using the d0xINFRA framework. All district has enough features which can run a marketplace.

These features include ranking and reputation, posting and listings, search and filtering, and payments and invoicing. district0x is the brainchild of Joe Urgo and MAtus Lestan and was released in February 2017. DNT is the primary token in district0x network. It is an ERC-20 standard token which is used in district0x governance and District Registry application. You can trade DNT token in Binance, Bittrex, UniSwap, and Coinbase Pro among other exchanges.