Curecoin has Proven it has Staying Power with a Dedicated Global Community of Citizen Scientists — Interview with Joshua, Founder of Curecoin

Has a background in computer and mobile network security.  He started in crypto running cryptobullionpools.com, a bitcoin mining pool - later repurposing 100% of the pool to work as a trusted oracle for Curecoin’s token distribution system.

Chris: Curecoin is a protein research-based PoW. What is the idea behind the development of Curecoin? In other words, how does blockchain technology work with the research facility?

Joshua: Fundamentally, CureCoin leverages the [email protected] Distributed Computing Network as an analogue for PoW, distributing tradable CURE tokens in the process. [email protected] was established over 20 years ago by Stanford University, now managed under Washington University School of Medicine, St. Louis (WUSTL). [email protected] is a non-profit citizen science project that simulates molecular dynamics in protein folding behavior with users’ donated computing power. Windows, Linux and Apple PCs all can participate with either their GPUs or CPUs. CureCoin established a team on [email protected] in 2013 and has incentivized the process of protein folding simulation ever since -  hoping to attract more users, and boost the computational research process.

[email protected] (FAH) randomly distributes protein simulations to its users’ computers. In turn, they help FAH search for (among other things)  “druggable states” found inside the molecules of degenerative diseases like Cancer, SARS-CoV-2 (COVID-19), Alzheimer's, Parkinson's, Ebola, and Diabetes. [email protected] uses predictive analytics in their point distribution system, which has evolved to be extremely sophisticated in determining validity of completed protein work units (WU’s) - without the need for redundant processing by other folders. Compared to “traditional” Distributed Computing projects - every WU a FAH team member folds is unique and traceable to their account. This helps increase competition among protein folders who participate fairly, but can quickly throttle, or ban accounts with faulty equipment or anyone attempting to “game” their system.

Curecoin LLC’s blockchain is not owned or operated by [email protected] (a mistake many people make). We operate independently - although our team members’ computers process a LOT of protein simulations served to them by the [email protected] network, in lieu of hash-cash mining.

Chris: Furthermore, how does the mining process enable energy usage for medical research?

Joshua: Curecoin did away with our hash-cash PoW mining layer back in 2018 (even then, “traditional” mining accounted for only 20% of the token distributions). Now Curecoin is loosely based on Peercoin's PoS model *with some key differences - this makes the blockchain itself 99% efficient. ALL the power used by the Curecoin Team is directly focused on actual scientific research. While running protein folding simulations is very energy intensive, finding new drug compounds, or understanding how cancer cells grow is a much more practical (and noble) use for all those electrons. This also presents some challenges when navigating a crypto space dominated by maximalists and decentralization purists.

Chris: You have a long history, who is there in the core team? How do all of them contribute towards the development of Curecoin?

Joshua: Back in 2013, Maxwell Sanchez (now CTO of Veriblock) and I put our heads together to start a venture to see if the primary focus of mining could be more -egalitarian-. We went through several iterations of a blockchain paired with distributed computing before establishing the first version of Curecoin 1.0 . We've had several members contribute to the "fold". From scientists, to financial experts, engineers, developers, philanthropists, and artists. To date, their efforts have helped us award Curecoins to over 28,000 registered contributors' on [email protected]

Today, the core team consists of myself and several other members whose pseudonyms I prefer to use in order to protect their privacy. Max is still on the team although his work on Veriblock has kept his involvement to a minimum. ChuckD has been helping clean up our wallet code for v2.1 (he incidentally also comes from a bioinformatics background), Hou5e, from Foldingcoin mans the support pages and contributes to code maintenance,Theknystar is one of our busiest promoters who also runs the cloud folding venture Green Cloud Folding(similar to Curecoin’s cloud folding system) . He also came over from the Foldingcoin team (a project on the Counterparty network that’s currently in stasis). Wuffy68 manages our social media and 501c3 sponsored charity called The Curecoin Project. FifthGhostbuster has been promoting our coin since the very beginning - he was also one of our top protein folding contributors with a significant folding farm. Dev is our financial advisor, who also has an Android staking app he’s been developing. “Mike” is our man promoting CURE in the Chinese mainland markets (challenging given current developments). NxtGenCowboy moderates our channels and facilitates communication with other crypto teams. We've had a college Comp-Sci professor work on introducing the idea to University labs with spare computing power (and a hunger to fund projects) as well as several others who've had tremendous ideas (the Curecoin-powered aquaponics shrimp farm comes to mind) - those never reached critical mass but projected a future based on real-world proof-of-work. Early on we had a businessman from Italy, who ran his own motorcycle company contributing computational power to [email protected] through our team. Last, but not least - we had a tremendous contribution from @PS3Olkkola; he was the worlds #1 folder at the time - contributing all his coins to support us and our charitable causes with a  monster folding lab run from one of his commercial properties. Many really cool people have contributed to the project over the years, I wish I could recognize all of them.

Chris: So, how do you price Curecoin? How much is the minting fee?

Joshua: Curecoin price is strictly dependent on market conditions. For what it's worth, it "should" be compared to how much supercomputer, or cloud instance time it would take to do the same amount of protein folding computational “work”. At today's prices, let's just say humanity is getting a VERY good deal for the amount of research Curecoin helped enable.

Some figures for your readers to compare current market prices to what these simulations would cost to run on both commercial on-prem, or cloud equipment (it’s astounding):

Our fees are some of the lowest in the crypto space. A single transaction only costs .0001 CURE. We don't collect any of that - it all goes back to those who are staking the coin.

Currently, with the proper set up, you can stake over 8% per annum with a Curecoin wallet full node, but this is likely to change [to something lower] in the future.

Chris: Moreover, how do you utilize the fee? Could you share a breakup in the interest of your investors?

Joshua: Right, as I mentioned before, we didn't set up the coin to make a windfall for the founders. 3% of the distributions are set aside in cold storage for coin development. This isn't a lump-sum, it's meant to be distributed throughout the life of the coin - currently it covers maintenance, vps and web presence and some promotional items. We had an initial 2.5% distribution sent as a gift to our pre-ANN crowdfund contributors (this was way before ICO's became a thing). We do have wallets set up where people can donate CURE or BTC or even cash (either directly to the 501c3 or via Amazon Smile) to help fund the project to the next level (they’re listed on our web). We used some donated funds to create a proof-of-concept Folding Club lab, which demonstrated how corporations and other large institutions could integrate Curecoin into their charity giving and employee recognition award systems. The Folding Club along with periodic airdrops to certified folders help incentivize even those participants with less powerful hardware - we like it when anyone can contribute (from the kid at an internet cafe in Accra Ghana, to the hedge fund manager who runs a small lab from the basement of one of his properties).

Chris: When does Curecoin go up for sale? How does the investor buy Curecoin tokens?

Joshua: Curecoin has been trading on several exchanges since 2014. You can purchase it on Bittrex, HitBTC, FreeBitcoins and BTCPoP. There have been several other exchanges that have come and gone or dropped all their science coin offerings. Our goal is to become more ubiquitously tradable in 2022 by getting “wrapped” CURE into some of the latest coin swapping services.

Chris: In the end, what are the plans for the future? How does Curecoin want to use the resources collected from the sale of cryptocurrency?

Joshua: Curecoin has proven it has staying power with a dedicated global community of citizen scientists. I can't name all the countries from which our team members/contributors have folded with us (it's a LOT). We're in an evolutionary arc. Our current Booster Shot Initiative is designed to expand rewards for participants, support new development and improve ongoing maintenance by enabling minting of reserved tokens. The near-term steps are to switch from our legacy cryptobullionpools to Research Core 2.1.x which will increase the total capacity for individual research participants by 144x. This new core comes with the ability to accelerate research through adding more DCNs such as [email protected] and GPUGrid. Also, 2.1.x aims to be the stepping stone to further decentralization, eventually becoming a human readable blockchain interface and remitting many oracle features. After this, we intend to implement upgrades based on the latest “variant” (pun intended) of the Peercoin blockchain. We've had discussions with some folks from that community. This would enable the latest technology like simple NFT's (which we could tie to the protein folding point system), smart contracts, creating a more decentralized ecosystem for distributions, and enabling us to add other DCN projects besides [email protected] 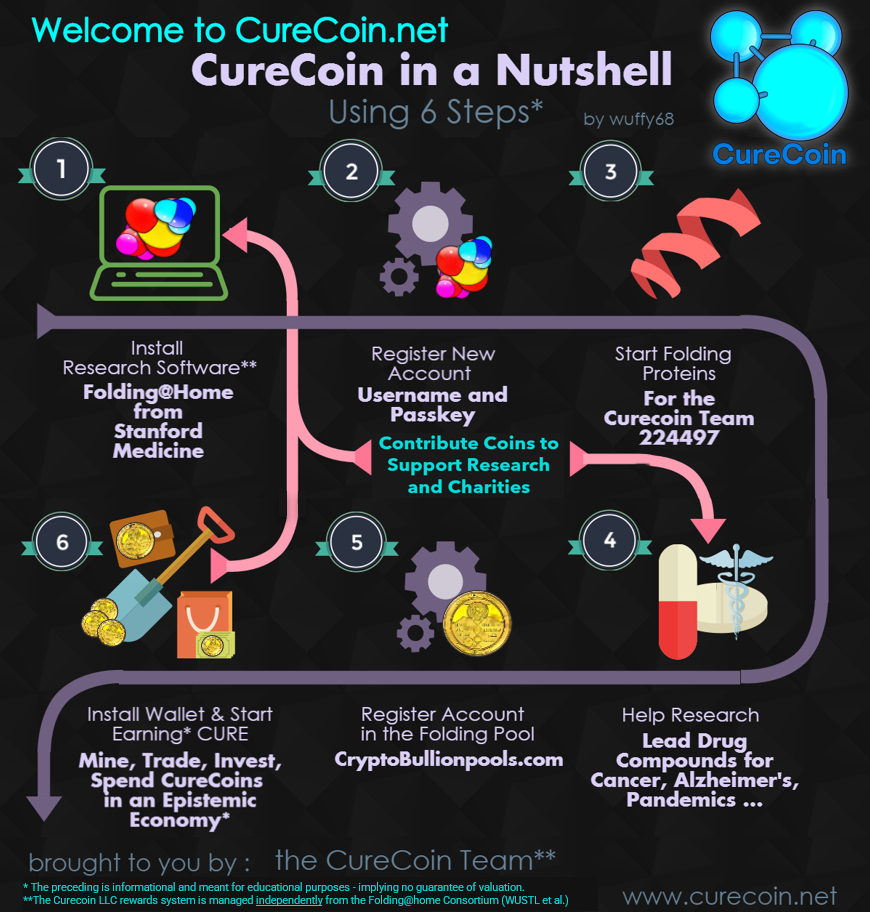 Novacity is a Virtual Community for Novatar Owners, which will have Digital Art Galleries, Casinos, and More — Interview with Stefan, the Novatar Digital Artist The BlueSparrow Token was Designed to Benefit People in All Parts of the World — Interview with Terri, BlueSparrow Operations Manager Football Legend Cristiano Ronaldo Signs NFT Promotion Partnership With Binance