😎 What is WallStreetBets, and is there a UK equivalent to the community?

Unless you have not used the internet in the last two weeks, there's a big chance that you’ve come across WallStreetBets.

Analysts describe the movement as the showdown between “retail and Wall Street”, and it has turned out to be one of the most talked-about developments in the financial markets in recent years.

If you want to learn about the WallStreetBets movement and read a comprehensive summary of what happened, then you’re in the right place. We also consider if there’s a UK equivalent to the community for investors.

The founders describe it as “a community for making money and being amused while doing it. Or, realistically, a place to come and upvote memes when your portfolio is down.”

Founded on January 31, 2012, the group currently boasts over 7.8 million members. It recently became notorious for leading an all-out attack against hedge fund managers on Wall Street (a term that generally refers to the U.S financial market, and public companies).

The rise of WallStreetBets

After eight years of existing in the shadows, WallStreetBets came to the limelight in January 2021. The group members embarked on a mission to save the stocks of companies that many hedge funds bet would decline in value.

The art of betting in favour of a stock’s decline is called short-selling. It involves borrowing shares of a company from a broker at its current market price and selling it immediately with the promise of repurchasing them when it drops lower.

The short-seller makes a profit if that prediction comes true, and if it doesn’t, they must still buy back the stock at higher prices, which means paying more money for the shares than they originally purchased.

Many hedge funds used billions of dollars as collateral to short-sell the stock of many companies and others, betting that these companies would perform poorly in 2021.

However, the guys on WallStreetBets had other plans and coordinated a mass buying of the stocks to price wreak havoc on hedge funds who betted otherwise.

As the price pumped significantly, the hedge funds had to buy back at extremely higher prices, losing billions of dollars in the process.

The process of being forced to closing short positions to buy back at higher prices and for substantial losses is known as a short-squeeze, and hedge funds like Citrol and Melvin Capital found themselves in that position.

Which companies have they helped?

GameStop has unarguably been the biggest beneficiary of the WallStreetBets movement. The company deals with video games, consumer electronics, and related merchandise.

The company’s revenue numbers have been on the decline since the advent of online games, and the numbers revealed that GameStop would lose money this year and the next. So, many hedge funds short the company’s stock and waited for a decline that never happened (at least not yet).

WallStreetBets coordinated a pump in the price of GME, causing the stock to go from roughly $17 per share on January 8 to $347 by January 27, a whopping 200% in the space of three weeks. 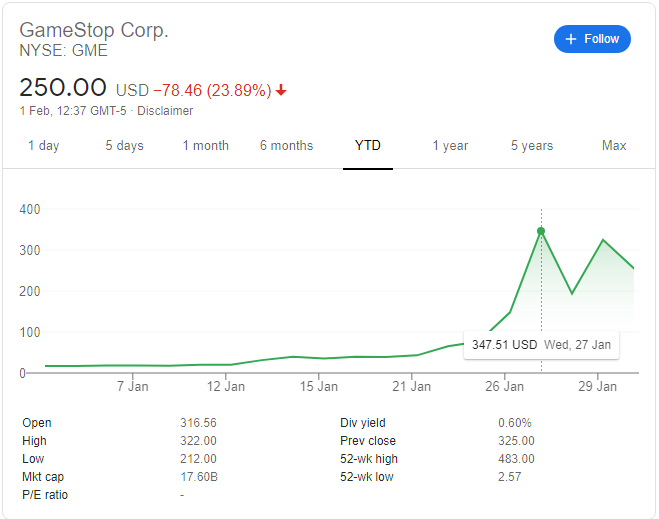 The stock still seats pretty above $250 per share at the time of writing, and many of the company’s real shareholders have seen huge profits as a result. However, it is worth noting that the stock could be in for a significant correction if the crowd from WallStreetBets decides to quit their movement. 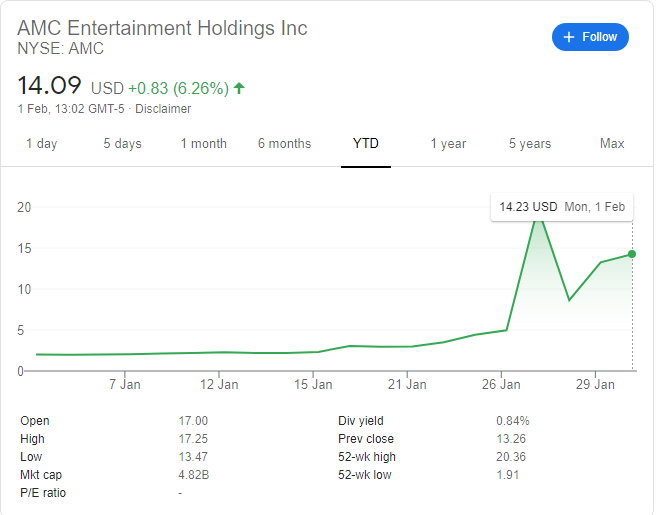 Following the all-time high on 27th January, the price of AMC’s stock dipped to $8.63 a day later and then rebounded to just above $14 at the time of writing.

Blackberry Ltd was another company whose shares the WallStreetBets community boosted. The Canadian firm already lost its foothold on the smartphone market, and its push to promote the internet of things (IoT) is yet to gain enough ground.

However, WallStreetBets touted the stock due to the large short positions held by fund managers, and prices soared from $7.44 to $25 when it peaked on Jan 27. 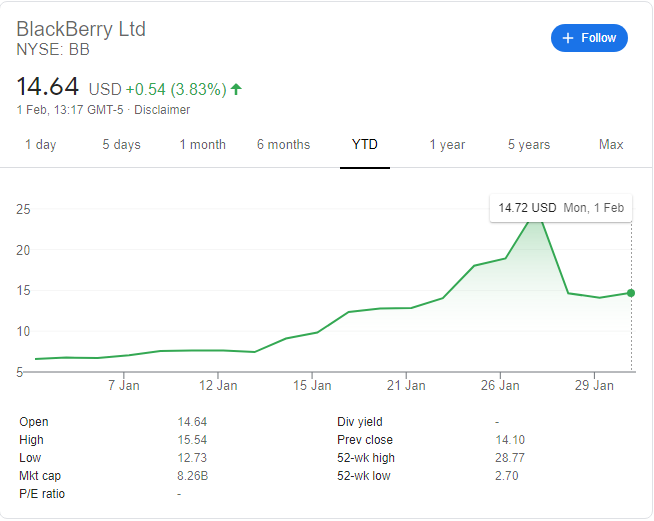 A slight market correction has pushed the stock back to the $14 range, although it appears the WallStreetBets camp is not done yet.

Macy’s Inc was another one of the heavily shorted stocks on WallStreetBets radar. The retail brand which has struggled to recover losses caused by COVID-19 lockdowns got a considerable boost, although not as much as the other WSB beneficiary companies. 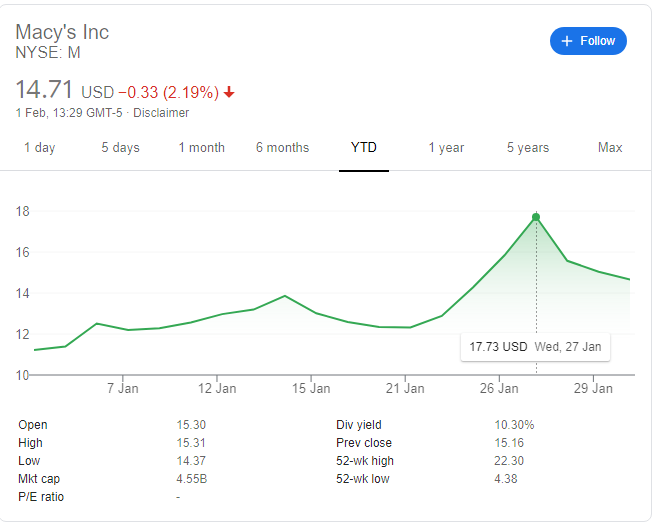 Why did r/WallStreetBets get banned on Discord?

At the peak of price action on January 27, messaging platform Discord banned the r/WallStreetbets server, where the group was coordinating its effort to influence the stock market.

However, the ban wasn’t in any way related to the group’s attack on the market. Instead, Discord said the ban was due to the continued use of ‘hate speech’ on the server, and that the moderators failed to heed several warnings.

In the wake of the ban, the community created new servers to sustain their movement but didn’t have to use these for long.

On 28th January, the Discord team confirmed it had removed the ban, and even assigned some of its staffers to help r/WallStreetBets manage the influx of new users joining the server.

The WallStreetBets community is primarily dominated by Millenials and Gen Zs, meaning that Robinhood’s zero-fee and instant access trading platform perfectly match their needs. Fittingly, the trading platform was a significant outlet when the attempt to take over Wall Street began.

But that relationship was short-lived. On January 28, at the peak of the price hike and after a triple-digit move in prices, Robinhood imposed limits on the trading of GME and other stocks that were being pumped by WallStreetBets.

The enraged community deemed the restrictions as an imposition on the rights to ‘free markets,’ and a sign that Robinhood was siding with the hedge fund managers that the community wanted to hurt.

Robinhood’s app on Google Play Store was temporarily downgraded to a 1-star rating as a result, while Apple’s swift move to turn off the review function was just enough to prevent a similar outcome.

Following a wave of lawsuits, Robinhood has reopened limited buys for the affected stocks but has already fallen out with some of its loyal users on WallStreetBets who has somehow found a way to continue their ongoing buys.

Meanwhile, the community moved to other brokers like e-trade to continue their buying, while cryptocurrency exchanges like Bittrex and FTX listed tokenised stock versions to attract new users.

The rise of WallStreetBets inevitably reminded retail investors of the powers they had, but haven’t been exercising on the market. Thus, the move to control asset prices favouring retail investors extended to the crypto market and yielded more results for investors who got in early.

r/SatoshiStreetBets (with over 200,000 members) coordinated a pump in the price of popular meme cryptocurrency, Dogecoin. The altcoin surged by over 1100% and even had a brief stint in the list of the top ten largest cryptocurrencies by market cap. 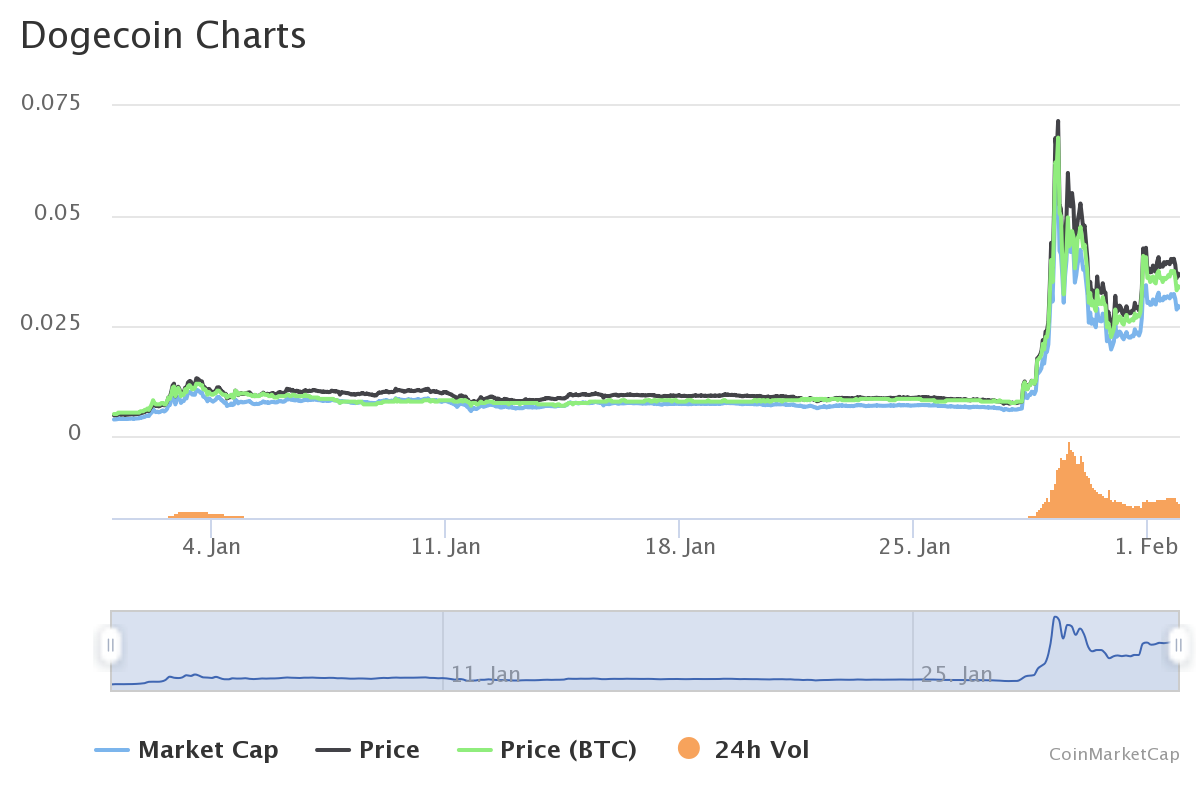 At the time of writing, DOGE had given up 50% of the gains from the coordinated buys, but increased volatility suggests that the market is still flooded with investors searching for profits.

Investors lost billions of dollars to the sell-off that followed the lawsuit and were happy when they learned they could engineer a move to push prices back up and recoup their losses.

A Telegram community named “Buy & Hold XRP” reportedly gathered the support of over 200,000 members within a short time, and r/SatoshiStreetBets also put a call out for investors to pump XRP. 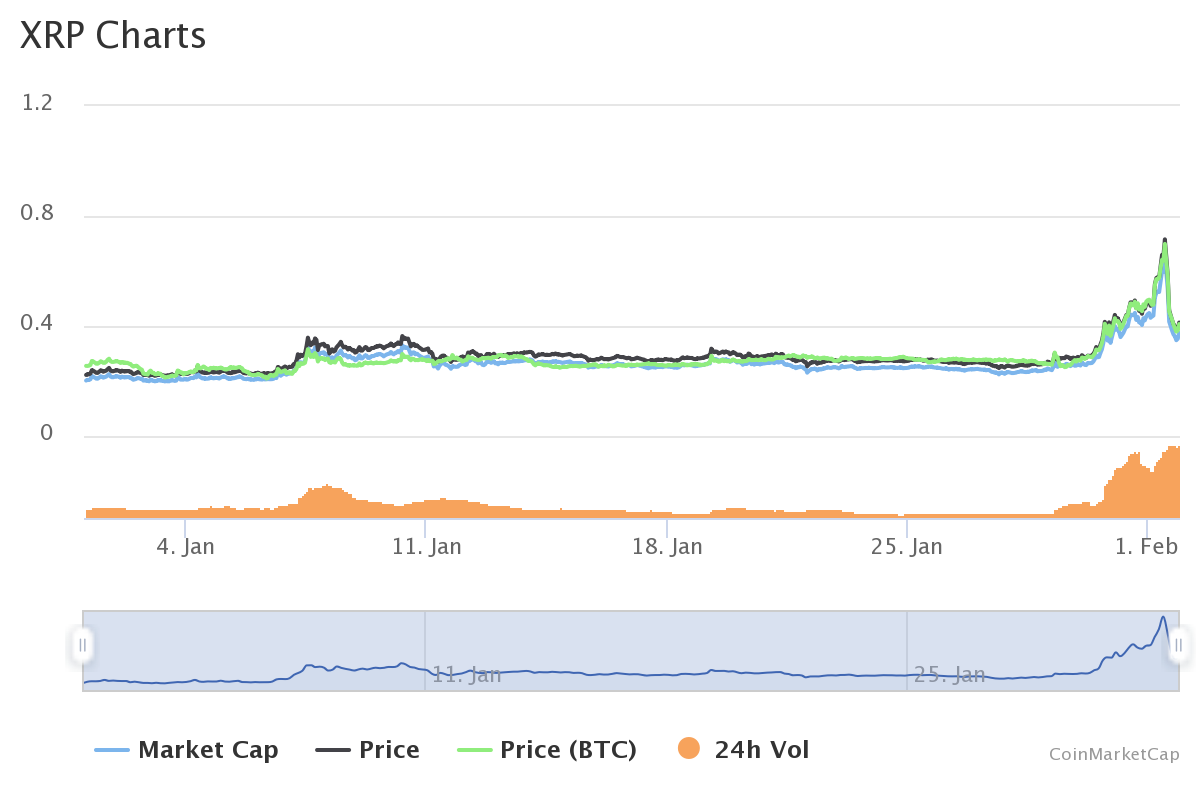 Within 48-hours XRP pumped from $0.27 to $0.71, and in the process recording its largest single-day gain. XRP has dropped to $0.41 and could face a steeper decline as the buying frenzy fades.

In the wake of WallStreetBets dominating headlines, cryptocurrency industry tracking site, CoinMarketCap (CMC) listed a non-existent WallStreetBets token. This came as a surprise to users who saw the asset ranked above Bitcoin in the list of largest cryptocurrencies.

CMC rightly points out that the fictitious gains are fake, “NO SUCH ASSET exists.” The listing is a marketing ploy designed to increase visitor pageviews on the CMC website.

How can I join the community?

There are mainly two ways to join the WallStreetBets community:

Is there the UK equivalent to WallStreetBets?

UK investors may wonder if there is an equivalent to WallStreetBets where they could discuss stock and trading options. We found some active communities, even though none of them currently has as many members as WallStreetBets to move the market.

As Robinhood said in a statement, the rise of WallStreetBets “have shown the world that investing is for everyone—not just institutional investors and hedge funds.”

While no one can exactly say when the trend will end, the fact that it has happened means we could see more retail coordinated market moves in the short-term, both in the stock and cryptocurrency markets.

Investors hoping to participate in these schemes must proceed with caution or risk losing a portfolio that they probably spent years to grow.

🧳 How to Become a Bitcoin Broker in 2022 🆚 CEX.IO vs Coinbase: Which One Exchange is Better? ⚫ How to Buy Polkadot (DOT) in the UK