⚡ Trezor vs. Ledger Nano S Comparison: What to Buy and Why?

Trezor vs Ledger Nano S are the best two hardware wallets in the market right now. Investors store billions of pounds worth of cryptocurrencies using these devices, primarily because it keeps these assets entirely offline.

If you want to invest in a hardware wallet to secure your crypto wealth, then you deserve to know what features the Trezor One and the Ledger Nano S offers. After all, it’s not just about looking shiny or easy to transport.

You want to get value for your money, and we’re here to help you do that.

Although we won’t be putting both devices in your hand (we wish you could), we’ll reveal all you need to know the make the right choice between the Trezor One vs. Ledger Nano S hardware wallets. Armed with this information, you’ll choose the best cold storage solution for your assets. 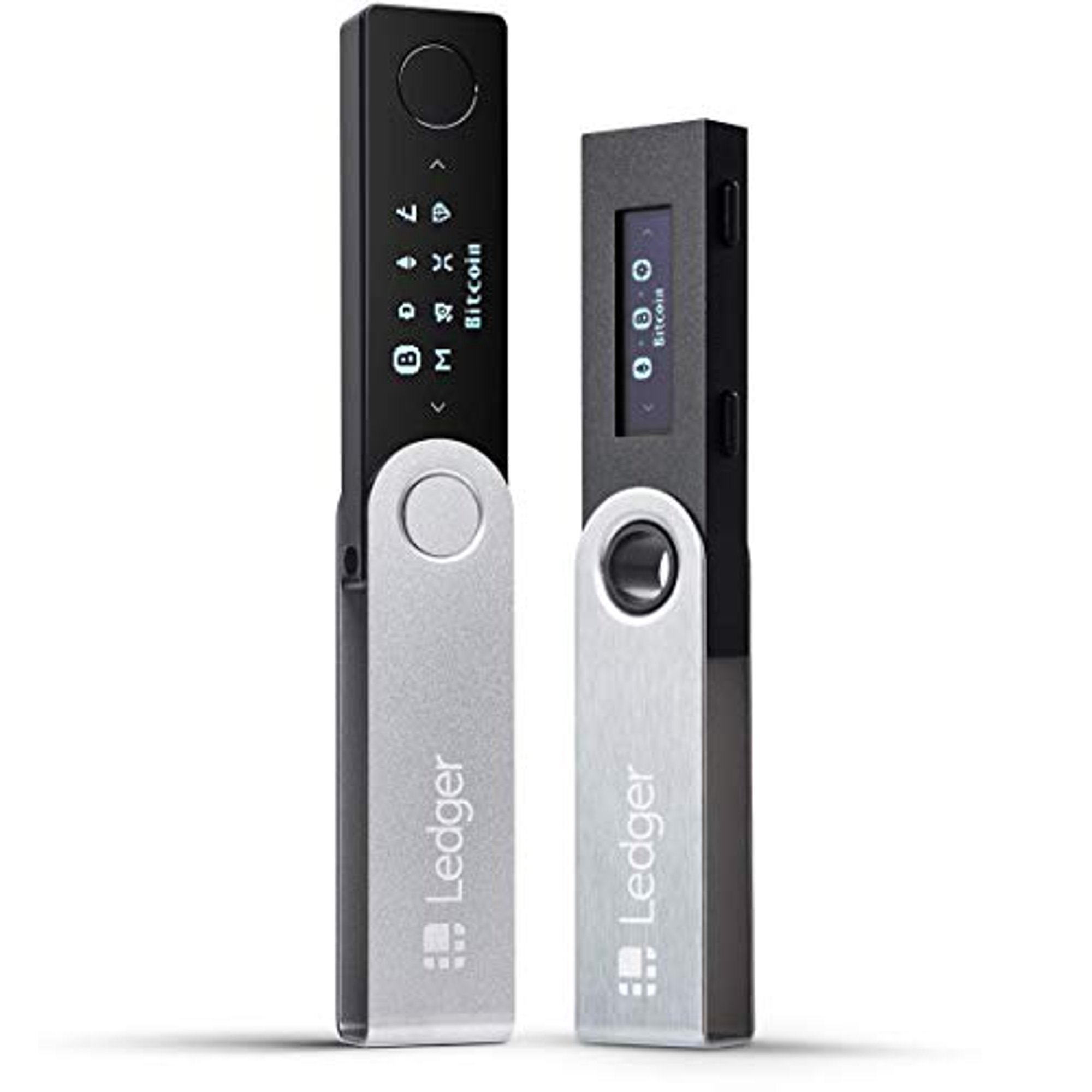 Ledger is a USB bitcoin wallet that combines smart card security and encryption technology to secure your cryptocurrency’s private keys. The Ledger wallet company is based in France and has sold over 1.5 million hardware wallets since its corporation.

Ledger launched its flagship product (simply called Ledger Wallet Nano) in December 2014. The company was going on to release improved versions such as the Ledger Nano S and the Ledger Nano X devices.

The Ledger wallet’s core features include the Ledger Live app, which lets users manage coins and tokens stored on the app, and a unique operating system (BOLOS), which protects it from hackers. 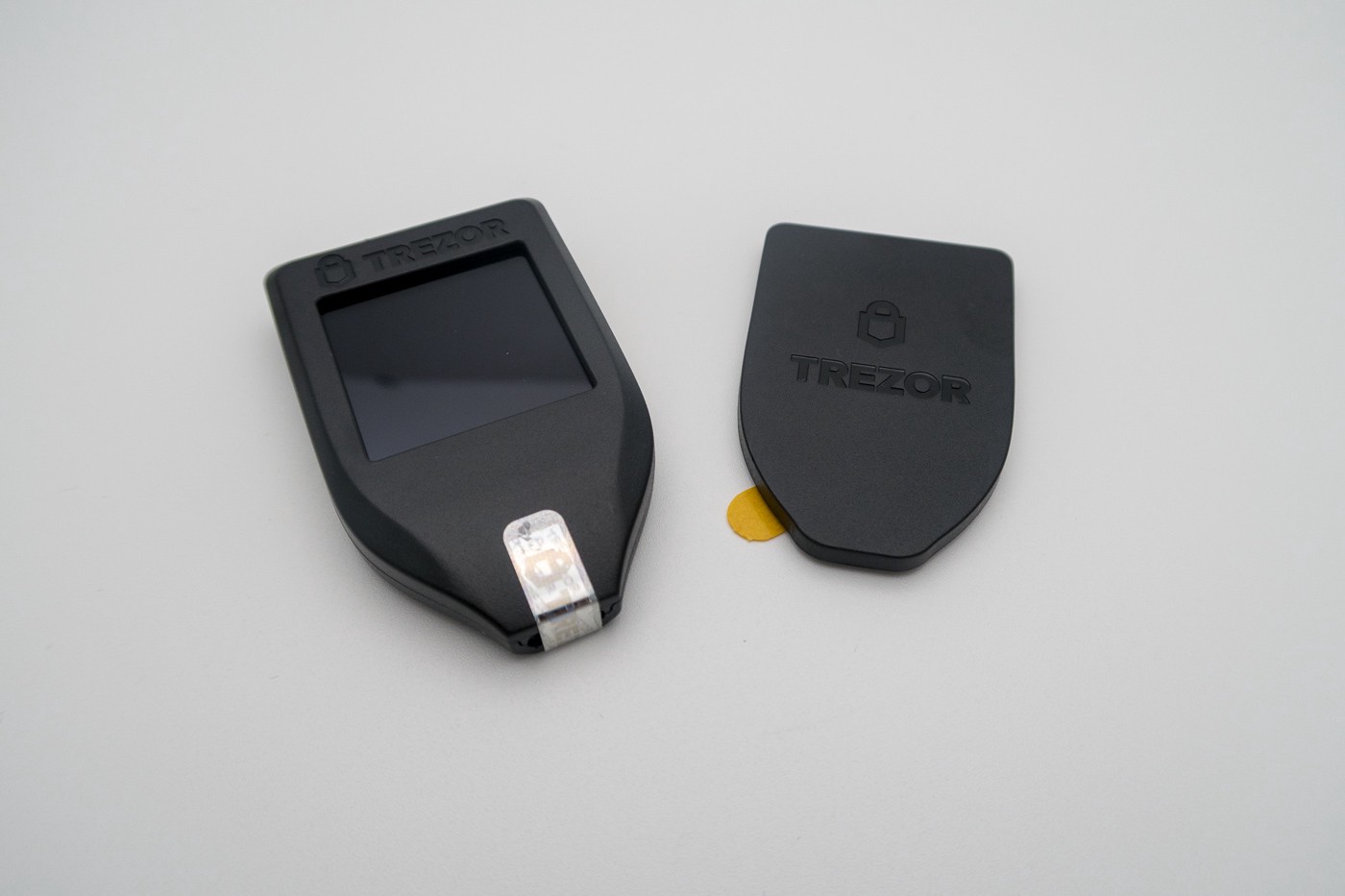 Trezor was the first bitcoin hardware wallet available to crypto users. It was developed by a Czech-based security company, Satoshi Labs. The company’s flagship product, now known as the Trezor One, was released in January 2014 and preceded the next-generation device, the Trezor Model T launched in February 2018.

Unlike Ledger, Trezor devices are shaped like mini-smartphones with a smaller screen. Core features include protected key operations, firmware verification, a secure update procedure, and an intuitive interface.

Trezor VS Ledger: Comparing their features 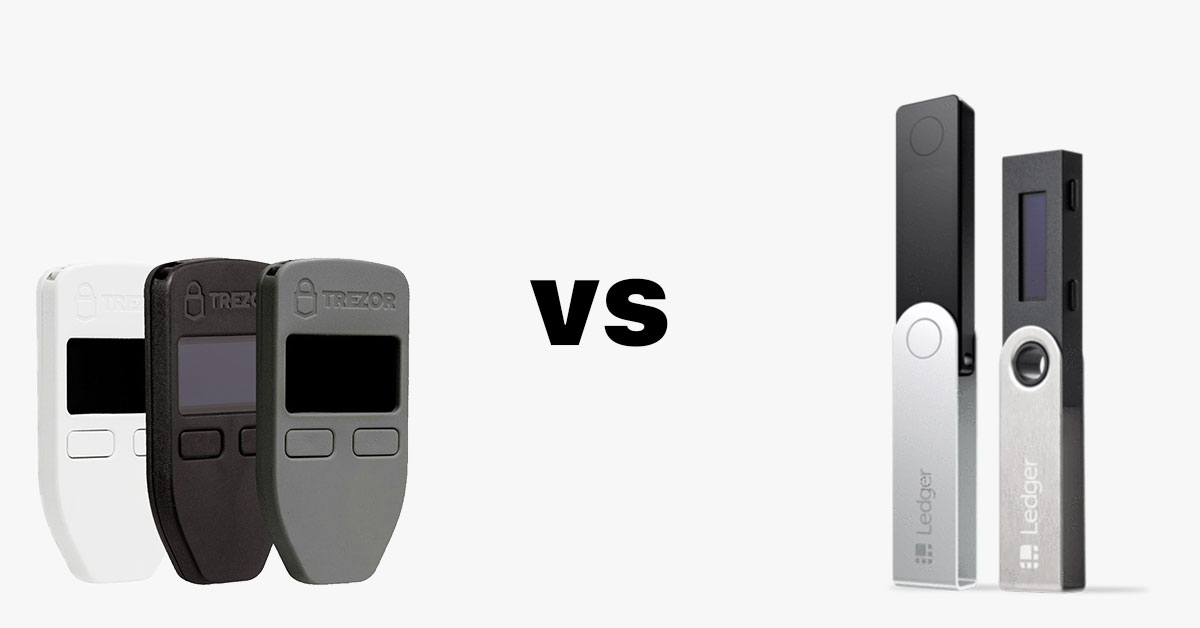 In this section, we provide a close comparison of Trezor One vs. Ledger Nano S features.

Trezor One: The Trezor Model One usually comes in a white or black color design and features two main buttons used to securely control the device and manage transactions. There is a small screen that displays transaction info and setup instruction, as well as a type-B Micro USB connector for connecting the device to your mobile phone or computer.

Ledger Nano S: The device has a USB shape and is made of brushed stainless steel and plastic combining metal and black colors. Users can trust Ledger’s combination of two micro-chip connectors and two buttons to manage communication between their computer or smartphone effectively.

Trezor One: The Trezor One screen is a monochrome display with 128x64 pixels size. It can display up to six lines of text, allowing you to read transaction information before confirmations conveniently.

Ledger Nano S: The device has an OLED screen with adjustable brightness functionality for users. The display size is 128x32 and is just enough to display setup instructions and other on-screen information.

Trezor One: You can take the following steps to set up a Trezor One after confirming that it comes with a tamper-proof seal upon delivery:

Trezor One: The Trezor One is mobile and usable because of its small size that can fit into most physical wallets. The developers include advanced security features such as the Shamir Backup but primarily supports simple, user-friendly add-ons such as wallet labeling and estimated transaction fees.

Anyone with basic knowledge of Bitcoin can use the Trezor wallet with little or no extra guidance required.

Ledger Nano S: Aside from a little frustrating setup process that is rightly so for security reasons, the Ledger Nano S is suitable for day-to-day use.

Texts on the supposedly small screen are displayed large enough for anyone to read, and the menu is easy to navigate. The device is also easy to carry around, just like any typical USB device, with the metal screen cover being an extra edge that protects it from being wrecked by keys in your pocket or bag.

Trezor One: The device is compatible with both phones (Android and iOS) and desktop computers (Windows, macOS, and Linux). Windows must be version 10 or higher, and macOS also has to be version 10.11 or higher.

Ledger Nano S: The Ledger Live app, which works with the Ledger Nano S, is compatible with any modern Android (Android 7+) phone using a USB cable. For iOS users, the app is available for iOS 9+ devices in consultation mode that allows holders to track their assets’ current market value.

Additionally, you can use a USB cable to connect your Ledger Nano S to desktop devices with the following specifications, Windows 8+, macOS 10.10+, and Linux.

Trezor One: Trezor is an open-source project, meaning that its software code is fully auditable and contains no backdoors for hackers. Other security layers include the generation of a 24-word seed phrase, PIN, passphrase, the Trezor password manager, and Shamir Backup.

After every unsuccessful attempt to insert your PIN, Trezor enforces a delay period before you can try a different PIN. After 16 unsuccessful attempts, the device wipes itself, meaning you can only access your funds via the recovery phrase. This makes it unable for hackers to brute-force their way into your wallet.

Another common way cryptocurrency holders lose funds is by malware transferring funds to an address different from the one copied on your clipboard. Trezor has a tool that warns users when they attempt to confirm such transactions on their device.

Ledger Nano S: Its use of a smartcard chip cryptographically verifies the Ledger Nano S integrity.

Other security layers include users’ ability to set up 2 PINs, one for confirming daily transactions and another for cold storage, and as a complementary backup key alongside the 24-word seed phrase.

After three unsuccessful pin attempts, the device erases itself, offering slightly higher protection if an intruder gains access to the device.

While Ledger Nano vs Trezor is available at almost the same price and offers virtually the same level of hardware security, here are some key differences you need to know:

Why should you choose a hardware wallet?

Anyone who holds large amounts of crypto must consider a hardware wallet for the following reasons:

The Trezor One and the Ledger Nano S are very close competitors, making it difficult to declare one an outright winner.

If we must, however, then you should know that the Ledger device is well ahead of the Trezor when it comes to size, durability, number of supported assets, and pricing. The Trezor is more suitable if you’re concerned with security and ease-of-use (because of add-ons and screen size).

While there are several reports of Ledger users being victims of email and SMS phishing attacks, Trezor is ahead in protecting user information provided during the purchase.

Given the third-party risks associated with using custodial wallets and exchanges, Hardware wallets provide a suitable and secure alternative for cryptocurrency holders to keep their funds entirely offline.

The Trezor One vs. Ledger Nano S are the lowest-priced high-grade hardware wallets in the market right now and a good entry point if you’re want to start using one. If you have a larger budget, you may want to check either the premium Ledger Nano X or the Trezor Model T.

We hope that the information shared in this review article will allow you to choose from the duo as you get on the path to keeping your crypto as far as possible from hackers.