'Alt season' is one of those slangs that new crypto investors will come across. If you're going to diversify your portfolio and invest beyond Bitcoin, then you need a clear understanding of what alt-season is and how you can position yourself for the profit-making often associated with it.

What does the Altcoin season mean?

So, any period in the market where most altcoins yield more profit than Bitcoin is referred to as alt-season.

This period is also usually marked by the Bitcoin dominance ratio dropping lower than it was before the start of the season.

What Is the Bitcoin Dominance Ratio?

This simply refers to the size of Bitcoin’s market cap, in relation to all other cryptocurrencies (altcoins.)

The chart below shows how Bitcoin’s dominance has trended since 2013 (Bitcoin is displayed in orange). Kindly note that the period in mid-2017 and early 2018 when Bitcoin’s dominance fell as low as 34-37%, altcoins contributing a larger share of the industry’s market cap then. 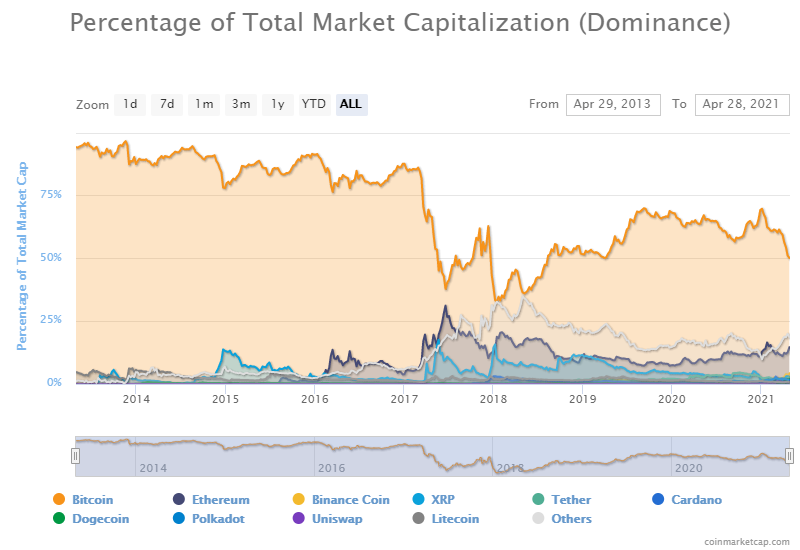 No one can pinpoint how long this season normally lasts. It could range from a few weeks to months, and maybe in the future last for years. At the end of the alt-season, the profits made by investors tend to flow back into bitcoin, and the bitcoin dominance gradually recovers.

The longest alt season is typically a result of a new trend in the cryptocurrency industry that results in many new coins being created.

For instance, in 2017, the rise of initial coin offerings (ICOs) provided a new avenue for startups to raise funds even when they had no working product. Many new coins entered the market and with prices soaring, the alt market had a blistering run. There were roughly 4000 cryptocurrencies, with their value sucking Bitcoin’s dominance levels.

As things may turn out though, over 90% of projects that launched that year turned out to be fake and many late investors lost their money, contributing to a 2018 bear cryptocurrency market.

Fast forward to 2020, the rise of decentralised finance (DeFi) and non-fungible tokens (NFTs) led to the birth of even more cryptocurrencies. The idea behind DeFi is to provide financial products that run independently of a central administrator. New coins are being created to power such products, with some projects even having 2-3 tokens for their users.

At the time of writing this article, over 9400 coins exist and Bitcoin’s dominance is hovering over 50%. Many altcoins have also had a good run-up, coinciding with Bitcoin’s rally which started in 2020.

While there have also been periods of peak altcoin performance throughout the industry’s history, altcoins prices still remain largely correlated with Bitcoin.

Any sharp increase in Bitcoin prices often has a similar effect on altcoins, albeit not at exactly the same time. Also, any rapid decline in Bitcoin’s price takes a toll on the market with alts shedding more gains.

How to know altseason is coming

There is no perfect indicator of an incoming alt-season. However, Blockchain Center provides a tool for gauging market sentiment and determining whether the market is in Bitcoin or alt-season.

The tool defines an altcoin season as a three-month period where 75% of the top 50 coins perform better than Bitcoin.

Industry observers also believe that the following signs theoretically confirm that an alt-season is around the corner:

Hence, any steady and gradual decline in Bitcoin’s dominance is an indicator that alt season is around the corner.

Is it altseason right now?

It appears to be altseason at the time of writing this article with Bitcoin’s dominance dropping from 69.1% in late December 2020 to 49% in April 2021.

Within the said period, many altcoins including Ether (ETH), Binance Coin (BNB), Cardano (ADA), Solana (SOL), Uniswap (UNI), Compound (COMP) have all yielded over ten to twenty-fold gains for investors. Dogecoin (DOGE) jumped over 6000% percent and many altcoins mimicking the meme-cryptocurrency have also seen similar yields.

These abundant yields also suggest that the season has lasted a long while, with no one able to tell when a market reversal will take place.

How to make money in altcoin season

There is a saying that “proper preparation promotes proper performance.” Hence, the best way to make money in altcoin season is to prepare before it arrives. One can do this by conducting solid research on new altcoins projects and trying to find one that has a strong potential.

While that might seem like a difficult task, certain indicators can help you find the best ones to invest in before the alt-season. Such criteria include altcoins that have a strong development team, a working product, and a loyal community.

Altcoins, linked to cryptocurrency exchange products, often tend to perform well in an altseason. This is because these platforms onboard more users during a period of peak market performance. Additionally, they can afford to fund new use cases from the revenue they generate from their business.

You can make money by simply buying and holding solid altcoin projects before or just after an altseason kicks off, and then selling them later for a profit.

Near the peak of Bitcoin’s epic run in 2017, many new coins launched, thanks to Ethereum’s smart contract functionalities.

Investors hot off the heels of massive gains from Bitcoin, while others, fearing they missed out, jumped into the altcoin market. Many alts hit new all-time highs that they’d never come close to revisiting until 2021 (off the back of Bitcoin completing a 100% recovery to its previous all-time high).

Perhaps the longest alt-season to date is the one we’re currently witnessing. It follows nearly the same pattern as the 2018’s, with many new coins launching and hitting record highs in a matter of weeks and months.

From a new 70% dominance, Bitcoin’s dominance levels now rests below 50% and could dip even further if the season continues

The above examples are the most extended altseason periods. However, there have also been “mini-altseasons” including in May 2018 and April 2019.

The concept of “alt season” is one that will likely continue as the crypto market matures. There will be periods when alts outperform bitcoin and a time when the leading cryptocurrency roars back to reclaim an outsized share of the market.

Over time, though, one might expect Bitcoin’s dominance to wane, at least to an extent. This is especially because of the numerous coins flooding the market, and the fact that most will likely gain traction.

However, what is sure, at least for the foreseeable future, is that Bitcoin will always represent a significant share of the crypto market, and then there will be “alt-seasons” for those who learn to play it to their advantage.

🟠 How to Buy UMA Coin in the UK 🟠 What is a Stablecoin? Types of Stablecoins 🔎 The Complete Ledger Nano X Review (2022)